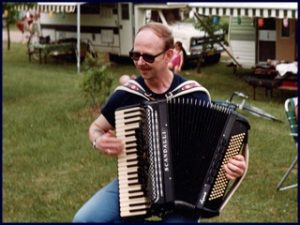 “No Norwegians in Dickeyville” by Bruce Bollerud

Brought up on a farm outside of Hollandale, Wisconsin, Bruce Bollerud was raised in a musical family and in the tradition of Norwegian-American old-time dance music. At an early age he was attracted to the sound of the bandonion, a relative to the concertina and button accordion, but he also played the piano, trombone and took a liking to the piano accordion in his high school years. Already at the age of twelve Bruce accompanied local fiddler Herman Erickson on bandonion at old-time dances throughout southeastern Wisconsin and he later played piano and trombone for the Rhythm Ramblers, known for their Dutchman polka approach to old-time music. Bollerud went on to work with other area bands such as Emil Simpson’s Night Hawks, The Polka Jacks and Feller’s Swiss Band, but the group he is most strongly associated with was the Goose Island Ramblers. For more information about this band, see the “Goose Island Ramblers Collection” page under “Collections.” After two years in the Air Force, Bruce settled in Madison, earned a degree from the University of Wisconsin and became a special education teacher. He played regularly with the Goose Island Ramblers as well as The Good Time Band, which had a long-standing tradition of playing mixes of polkas, waltzes, fox trots and country western tunes at Madison’s popular polka bar, the Essenhaus. Bollerud’s repertoire is diverse, ranging from humorous and “Scandihoovian” dialect tunes, Scandinavian old-time, country western, a variety of polka traditions, hillbilly music and more, and he still continues to entertain audiences in the Madison area with his musical talents. In addition to being a prolific and active musician, Bollerud has maintained an impressive collection of memorabilia (including photographs, newspaper clippings, playbills, correspondence), musical contracts and music recordings from throughout his long career, and has been left a number of unique and valuable recordings of Norwegian-American old-time music. He is also the author of the accordion music books International Accordion Favorites and Accordion: Uff Da! Let?s Dance! Scandinavian Tunes & House Party Music.