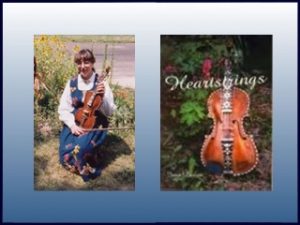 Inna Larsen is an active musician from Madison, Wisconsin, specializing in Hardanger fiddling. She also writes fiction relating to Hardanger fiddling traditions and the Norwegian-American experience in addition to educating the public about this instrument through presentations and performances. A member of the Hardanger Fiddle Association of America, Larsen actively promotes and advances Hardanger fiddling in the Madison area both through her own performances and by founding the group Fykerud’n Spelemannslag, a monthly gathering of Hardanger fiddlers from southern Wisconsin. The group Fykerud’n Spelemannslag (or the Fykerud Fiddlers Group) is named after brothers Lars and Hans Fykerud, accomplished Norwegian fiddlers who emigrated from Telemark county to Stoughton, Wisconsin in the late 1800s, though Lars eventually returned to Norway where he died in 1902. In addition to her many public appearances and performances, Larsen has also written several fictional pieces in which she weaves Hardanger fiddle traditions into her stories. She has published two books, Heartstrings, a historical romance and a sequel entitled Ball of Wax.