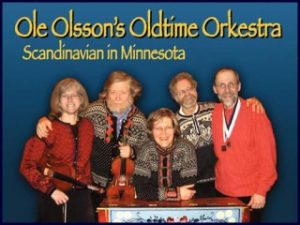 Ole Olsson’s Oldtime Orkestra formed as a one-time group comprised of veteran Minnesota Scandinavian musicians working in both Norwegian and Swedish traditions, and all of whom have performed with several other bands. In summer 2008 one of the members, Art Bjorngjeld, recalled the group’s origins for folklorist Jim Leary:

We got asked to play at a dance festival. Moosejaw [MN]. They have a wonderful festival out by Detroit Lakes. At Maple Lodge. So they have skiing. It’s in March. They have cross country skiing and they have dancing. It’s mostly contra and square dance, but they’ll always bring in another type of band: Cajun or swing. One year they wanted to do Scandinavian and they asked me to put together some kind of a band. And I said, “Well I’ll just get together with friends of mine.” Char Bostrom and Paul Wilson and Mary Abendroth. And we would do this one gig. Well we needed a name for the band, so I just played around with different names. Trying to find something that was catchy. I thought of Ole Olsson’s Oldtime Orkestra. And I really wanted us to go by the initials, which I thought was really cool-sounding ‘cause some of these bands from Norway, they put their initials together and they come up with a new name. I thought O-O-O-O [pronounced with the lip puckering Scandinavian ø sound] would be really good, or if you just strung it together, OOOO, and made a word out of it. And if you actually say it correctly, O-O-O-O, it takes longer than saying Ole Olsson’s Oldtime Orkestra. So we got a few jokes out of that.